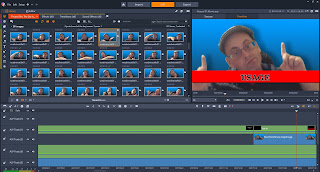 I started a project earlier this year and I only got around to making an actual physical video. I do have the first video finished... I haven't written the information for the upload or even rendered the video yet but it is edited which took a long time and I think I could still get something great out!

Thing is, when I concepted the series, I knew that the episodes would have to be made daily. I decided to make and everyday series (well a M-F series) that will run for about a month at a time. Starting next year the series will most likely be about 4 times a year with me uploading poetry videos and possibly other related videos!

A few weeks back, I edited a version of the video and thought I was ready for this new series but as I was finishing it up, I found out that it wasn't right. So, instead of uploading something I was unhappy with, I started it all over and took out some of the personal stuff I had put into each episode! Don't worry... there is still plenty of personal stuff... I just don't ramble on as much!

Anyhow, I thought I'd have it ready this week but I want several episodes in the backlog before I upload any of the videos. That's why I haven't been uploading anything lately and I don't have to justify it... I know... but I feel like I need to explain it...

Therefore I also won't be uploading anything this week which really brings me down. However, the series will most likely start up next week and thus, through planning out my schedule I'm thinking I'll only be able to upload about two  sets of the month long series but I am planning a couple great videos for in between!
on August 26, 2018 No comments: